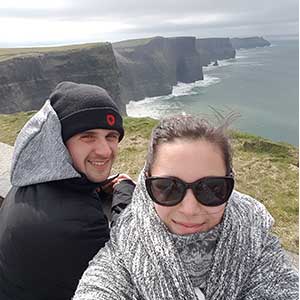 “Easy going people that like to travel and enjoy history”

Sean and Tamara, what is your personal view of Europe?

It’s a needed formation of countries that provides security to the members. It helps take down barriers between different cultures and tries to build a better life for all its members.

In your opinion, what does Europe mean for your home country, Ireland?

It gives us freedom of movement within the continent. As we are a small country, it provides protection from foreign invaders and/or in trade negotiations. It gives our businesses a bigger consumer base to sell their products or services. We have also seen an increase in tourism due to the easy movement of people within Europe.

The idea of Europe is great but can be poorly executed in terms of different political policies it tries to introduce.

Improvements can be made at every level. Democracy has been badly represented in the last 10+ years and has given rise to far rightism. People are starting to disbelief in the system.

As a continent, you will not find a more luxurious place for different cultures… French… Spanish… Italian & German… Most places in the world take their influences from a culture of Europe, maybe due to past explorations.

The idea of Europe is great but can be poorly executed in terms of different political policies it tries to introduce.