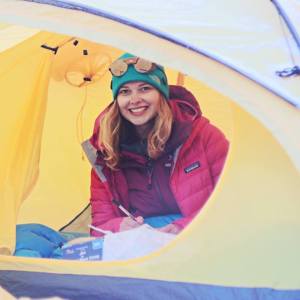 Aleksandra is a young adventurous girl from Poland who, inspired by the character of Alexander von Humboldt, wants to go into the unknown and explore this extraordinary world. In the mountains and on the road, she feels at home. Exploration and challenging herself is what she most desires. Here is her amazing facebook-blog

Aleksandra, what is your personal view of Europe?

Europe means home to me. A home which I have sentiment and gratefulness for, as well as I would like to abandon. With all its diversity, cultures, languages and differences, it appears to me as something most certain, something predictable. I know it better than any other continent, and because of many journeys, I began to understand it more and more. And thus, I see how much of the world’s evil had its source here. Brutal conquests of distant lands, colonization, the fight against indigenous communities, worship of a white man, vanity, theft of works of art which can be now found in European museums. I know it’s only one part of the story, but it’s a real part. Real and shameful. This continent is beautiful and rich in every aspect, but it is also a continent of hypocrisy, blind rush, prejudice, and pride; a continent that seems to have abandoned the values that it used to be proud of.

In your opinion, what does Europe mean for your home country, Poland?

It’s difficult for me to speak in the name of the whole nation, but I believe that Polish people treat Europe as the land that betrayed them. Despite the passage of time, in the hearts of many citizens of my country burns regret caused by dishonest attacks on our areas, our freedom, tradition, culture, and life. There were too many unkept promises to remain trusted and feel safe now. Once we were one of the most powerful countries in Europe, but the persistent efforts of other countries and undoubtedly many wrong decisions taken by us led Poland to the point where it seems that its greatness must be built anew. On the other hand, for many young people like me, Europe is an opportunity to grow, a new horizon, a chance for a different life. It’s a gate to the world with all its diversity. A beautiful lesson and a home.

You can look at Europe from an infinite number of perspectives and from each of them it will appear a bit different. For some it is a prison, for others, it is a promised land. I don’t want to create stereotypes, because the problem with them is not that they are untrue, but that they are incomplete. I told only one story, although I have plenty of them. Europe is also the noise of trees, the beauty of the morning, prayer in hundreds of languages, animals not seen anywhere else. It’s both a whole and a part of something bigger. And I think we should always remember it. To care for and value its diversity, but also to be open to new cultures and wonders. Understand that we are just a piece of a larger puzzle in which no part is more important than another, but each has meaning.

You can look at Europe from an infinite number of perspectives and from each of them it will appear a bit different.