Posted at 10:24h in Uncategorized by Eva Kaznelson 0 Comments

I describe a certain emotional state as “hovering” or “flying”. This feeling, coupled with ease, I had not felt as often in the past few months, as before.
Of course, life changes with a new person and yet there are differences from parent to parent.
That meant the following to me: I have to get closer step by step. Traveling is probably quite good for that (although the knowledge that you do not have a stationary home had to be processed first of all …🙃)
It started with thoughts and small pleasures throughout the day: highlighting again and again, for which I am grateful and what works well. Dancing whenever possible. Allow powerful colors – as in the picture. And finally jump again.
Every now and then I see pictures that seem to have been taken away from reality… and I suppose I would not have jumped if Jan did not take a picture, but in the jumps I suddenly felt the energy I had so often lately lacked.
And so I can say in good conscience: I am immensely glad to have entered the Burrow and to learn to fly together with the wildlings at my feet.
Every day anew.
Enjoy the red. And not only fly, but also learn to walk, because barefoot shoes have the nice side effect that a lot more muscles are activated and walking is suddenly back to something special.
P.S. (May I share that?) A friend told us about her barefoot shoes and we were interested. Shortly thereafter we discovered wildlings and I ordered and found: what a beautiful concept. I want to be part of the Burrow. We wrote, got to know each other … And then a week ago, the time has finally come: Our little ones arrived in Bilbao.
P.S. 2 Since the photo I try, whenever I think about it just to hop, without camera and with a slight smile. 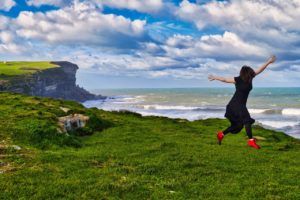